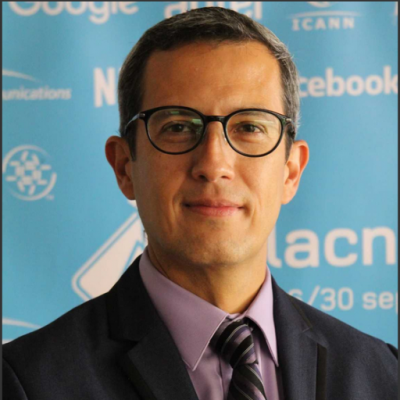 Mr. Oscar Robles is the CEO of LACNIC, the Latin American and Caribbean Internet Addresses Registry, an international non-government organization established in Uruguay for the administration of Internet Numbering Resources for 33 territories in the Region.

Mr. Robles has a long experience in building institutions related with Internet resources in Latin American and Caribbean region, promoting its professionalization and its long term sustainability. Is co-Founder of LACTLD – the Latin America and Caribbean Country Code Top-Level Domain Organization -, which groups the ccTLDs from the region, co-founder of LACNIC, co-founder of LAC Net, a public permissioned blockchain in LAC region initiative from BID Lab, and one of the .LAT promoters. From 1995 to 2015 he worked for NIC Mexico, organization in charge of the internet domain name .MX.

Robles has been working on Internet Governance, Domain Names and IP addresses matters since 1995. He has actively participated in the creation of ICANN, the organization who oversights the Global Domain Name System. Mr. Robles holds a Bachelor degree in Computer Systems Engineering, a Master degree in Information Technologies Management, from Monterrey Institute of Technology and several executive education courses in Kellogg School of Management, Stanford University, University of Texas, Montevideo University and Monterrey Institute of Technology.